Green Tea Protects from the Psychological Effects of Stress in Rats 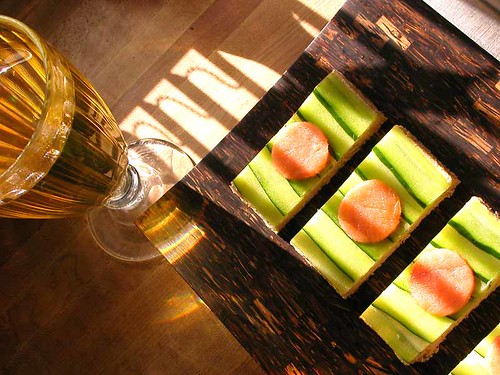 Feeling stressed? Enjoying a cup of green tea with your lunch may help. (Photo by chotda)

It’s no secret that a cup or two of green tea can make you relaxed, but now scientists have shown that green tea can reduce the effects of psychological stress in rats.

In a paper yet to be published, rats were put under stress and given either their usual diet or a diet enriched with green tea polyphenols (link). To see how psychological stress and green tea were related, experiments measuring cognitive performance and serum levels of stress hormones were done.

Psychological stress was induced by keeping the rats restrained and inhibiting their movements six hours every day for three weeks. Their cognitive performance was then evaluated using an open-field test, a step-through test and a water maze. These tests measure both the activity level and memory ability of rats.Green tea polyphenols and cognitive performance

In the open-field test, which measures how actively rats explore the arena, the stressed rats were much less active than the control rats. No significant improvement was seen in the rats fed the low dose of green tea polyphenols, while the rats given the medium or high dose were almost as active as the control rats.

The memory of the rats was also affected by stress during the step-through test and water maze test. These tests measure spatial memory and the ability to remember adverse stimuli. Again, only the medium and high doses of GTPs significantly reduced the harmful effects of stress on the rats’ memory.

Stress activates the symphatetic nervous system, which results in a release of catecholamines. Catecholamines are “fight-or-flight” hormones that consist of epinephrine, norepinephrine and dopamine. They are involved in the modulation of cognition, awareness, attention, and emotional state, helping the body to cope with a stressful situation. According to the authors, when the stress level is too high for the body to cope with, cognitive impairments appear and the levels of these hormones begin to decline.

Plasma levels of norepinephrine (another stress hormone, also known as noradrenaline) and dopamine were remarkably reduced in the ST and LG rats. In the MG and HG groups norepinephrine and dopamine levels were lower than in the control group, but much higher than in the LG group. In other words, medium and higher levels of green tea polyphenols partially inhibited the stress-induced decrease in the levels of these hormones.

All four stress groups had higher levels of plasma cortisol than the control group. Cortisol is often referred to as the “stress hormone”, since its levels increase in the presence of stress and anxiety. Cortisol also causes blood pressure to rise and immune responses to be reduced. Feeding the stressed rats green tea polyphenols lowered their cortisol levels, but the reduction was statistically significant only in the MG group.

The levels of reactive oxidative species (ROS) were increased in the brain tissue of stressed rats, but again, medium and high doses of GTPs partially inhibited this increase. Similarly, the total antioxidative capacity in brain tissue was reduced by stress but to a smaller extent in the MG and HG groups. The levels of superoxide dismutase showed a similar trend, but the differences were not statistically significant.A different effect was seen in the levels of interleukin-6 and interleukin-2. While stress increased IL-6 and IL-2, feeding the rats GTPs did not inhibit this increase. In fact, green tea polyphenols increased IL-6 even further. This may be because increased levels of IL-6 can enhance the body’s adaptability to stress. Similar effects have been reported in other studies on green tea.

Psychological stress negatively affected the behavior and memory of rats. This adverse effect was associated with higher levels of cortisol, reactive oxygen species, IL-2, and IL-6, and lower levels of norepinephrine, dopamine, and total antioxidative capacity.

These changes were partially inhibited by diets containing 0.5% and 1% green tea polyphenols, except for IL-6, which was further increased by GTPs. A diet containing only 0.1% GTPs did not show significant results.

a good reasion to switch over to green tea.

Posted via web from rmarcandrews’s posterous